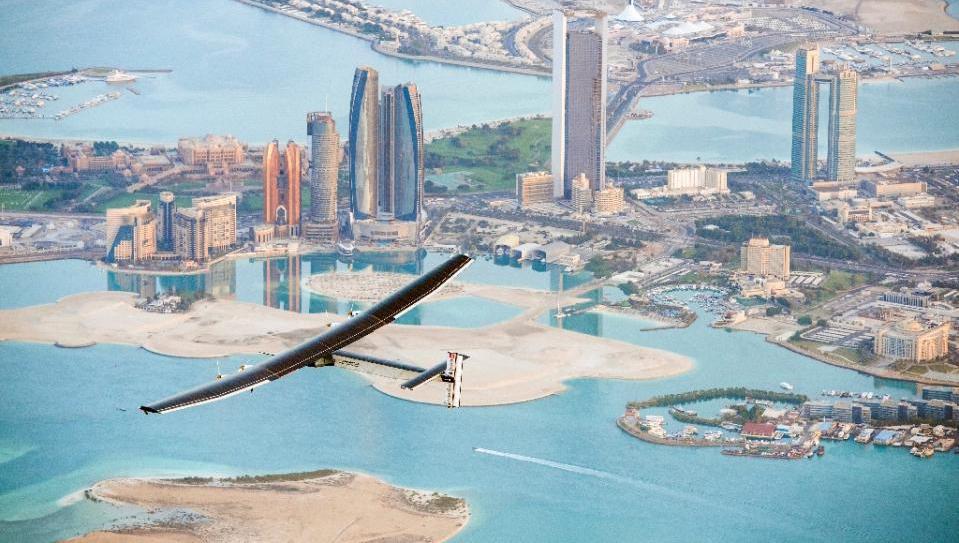 Abu Dhabi (AFP) - A solar-powered plane made a third successful test flight in the United Arab Emirates on Monday ahead of a planned round-the-world tour to promote alternative energy.

Organisers hope that Solar Impulse 2 may head off around the globe as early as Saturday but caution that the launch is dependent on the weather, even in the relatively cloudless Gulf.

The hour-long test flight was the plane's third from the UAE capital Abu Dhabi's small Al-Bateen airport, but the first for Solar Impulse chairman Bertrand Piccard, the descendant of a family of Swiss scientist-adventurers.

"Hopefully next weekend, if the weather is good, we will be in the air going 35,000 kilometres (21,748 miles) to the east until we come back here," Piccard told AFP.

The project is the fruit of 13 years of research and testing by Piccard and Andre Borschberg, two Swiss pilots whose idea was initially ridiculed by the aviation industry.

Their plane is powered by more than 17,000 solar cells built into its wings which, at 72 metres (236 feet), are almost as long as those of an Airbus A380 superjumbo.

The light-weight carbon fibre aircraft weighs only 2.3-tonnes, about the same as a family 4X4 or less than one percent of the weight of the A380.

The two Swiss pilots aim to demonstrate that "clean technology and renewable energy can achieve the impossible," Piccard said.

View galleryBertrand Piccard lands the solar-powered plane Solar&nbsp;&hellip;
Bertrand Piccard lands the solar-powered plane Solar Impluse 2 at the Al-Bateen airport in Emirati c …
The world tour will see the plane fly from Abu Dhabi to Muscat in the neighbouring Gulf sultanate of Oman before crossing the Arabian Sea to India.

It will then head on to Myanmar, China, Hawaii and New York.

Landings are also earmarked for the midwestern United States and either southern Europe or north Africa, depending on weather conditions.

"From the operation point of view, this part of the world and the Middle East is the best location for us to start because it gives us the possibility to fly over India and China very early in the season," said Borschberg.

"It also gives us the possibility to be back in summer with relatively good weather," he told AFP.

The plane is the successor to Solar Impulse, a smaller craft which notched up a 26-hour flight in 2010, proving its ability to store enough power in lithium batteries during the day to keep flying at night.

The new plane will travel at speeds of between 50 and 100 kilometres per hour (30 and 60 miles per hour), the slower speeds at night to prevent the batteries from draining too quickly.

Borschberg and Piccard will alternate at the controls of the aircraft because it can only hold one person.

Its pilot will be linked to a control centre in Monaco where 65 weathermen, air traffic controllers and engineers will be stationed. A team of 65 support staff will travel with the two pilots.

The aircraft is scheduled to arrive back in Abu Dhabi in July.

Two years ago, Borschberg and Piccard flew the original version of their plane on a two-month journey across the United States.

The new aircraft had its maiden test flight in Switzerland last June.

It was then disassembled in November and shipped to Abu Dhabi, where further testing has taken place.
"It is a historical first that we are trying to attempt," said Picard, describing the planned tour as "very, very challenging and difficult."

"Physically we are fine. Andre is preparing himself with yoga (and) self-hypnosis."