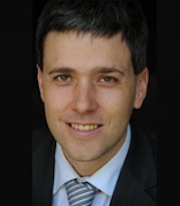 .(JavaScript must be enabled to view this email address)

Doctor in Physics from Universidad Autónoma de Madrid (1996), where he served as Associated Professor in the Department of Applied Physics between 1996 and 1999. In February 1999 he joined the Basic Physics Department of the ULL as Associated Professor, and Professor since 2004. He teaches in Electronic Engineering, Industrial Engineering, Master in Electronic Technology and Master in Renewable Energies. He is also Senior Researcher of the Spanish Applied Economics Studies Foundation (FEDEA). Since 2006, he is the Director of the Master in Renewable Energy at the University of La Laguna. He was Board Member of the Technological Institute for Renewable Energies (ITER, SA) of Spain, and the Granadilla Industrial Park between 2003 and 2007. He is Board Member of the Güímar Industrial Park from 2004 to present. He has been appointed in 2011 to the Permanent Commission of Experts in Energy of the Canary Islands Government. He has given countless lectures and conducted training and specialization in the area of renewable energy. His research focuses on the field of renewable energy, energy efficiency and associated technologies, having published over fifty articles in international journals, a book on biofuels and has participated in more than twenty national and international research projects and contracts with companies. In more than half of these projects and contracts he has served as principal investigator. He has just published a book entitled "Renewable Energies and CO2. Analysis Costs, Environmental Impacts and Technological Trends - 2012 Edition " Lecture Notes in Energy Vol. 3, Ed. Springer Verlag London Inc. Finally, he is also evaluator of the Spanish Evaluation and Foresight Agency (ANEP).