Lockheed Martin's energy group is raising its profile in a bid to enter the energy storage market with an offering of lithium-ion battery systems, in addition to its new flow-battery chemistry.

The energy storage market is tricky but growing. The big international conglomerates and equipment providers have taken notice of this shift in grid architectures -- and battle lines are being drawn. AES Energy Storage, Panasonic, LG Chem, Samsung, Saft, S&C Corporation, ABB and GE's Current are all in the mix, as well as loads of newcomers including Tesla, Stem, Alevo and Green Charge Networks.

Lockheed Martin comes to the battle with more than 100,000 employees worldwide and a market cap of $69.1 billion, as well as the advantage of being the recipient of nearly 10 percent of funds paid out by the Pentagon in 2013 (here's a spreadsheet from the GSA).

These firms are compelled by a dynamic, rapidly growing energy storage market across utility, commercial and industrial, and residential segments.

Richard Brody, director of sales and marketing for energy storage at Lockheed Martin Advanced Energy, and Brad Fiebig, product manager, explained that the company is going after the storage business on two parallel tracks.

The first is the integration of lithium-ion systems. Brody noted that while lithium-ion battery prices are falling, "We've seen precious little innovation and cost reduction in the balance of system."

He said that the typical approach taken by battery vendors is to house the system in a human-habitable shipping container with fire suppression and lighting. He added, "A battery for the grid should be like any industrial piece of equipment -- a purpose-built design that's built, integrated and backed by one company, just like every other power product designed for the grid."

"We designed a complete, integrated AC lithium-ion system," said Fiebig, adding, "Everything is in there: batteries, battery management, thermal management, with the AC interconnections engineered for single-side access."

The system is sized at 250 kilowatts/500 kilowatt-hours, but can be configured for smaller or larger deployments in C&I applications and small to medium-size utility projects.

"We only source from top-tier suppliers," said Brody, pointing out that some companies are in the integration business "to drag through sales of their own components. We have the freedom to select the best components."

The company pointed to the usual C&I applications: demand-charge reduction, peak shaving, solar-plus-storage and self-consumption -- but also suggested that those behind-the-meter assets can still provide services to the grid and stacked revenue streams to stakeholders.

"We think lithium-ion can address a significant portion of the applications on the grid" with known limitations in cycle life, depth of discharge and scalability, said Fiebig, "but for longer durations, we think flow batteries are the better solution." 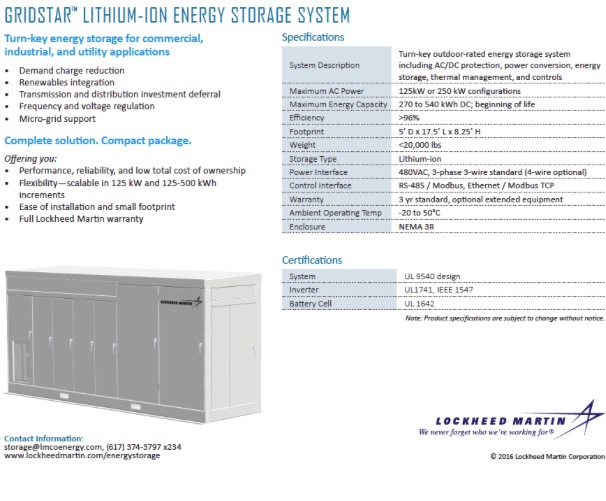 Lockheed Martin's other energy storage effort is in commercializing a new flow-battery technology.

In 2014, the aerospace giant acquired "substantially all of the assets of Sun Catalytix Corporation" for an undisclosed amount. Approximately 25 employees were transferred to Lockheed Martin as part of the deal.

When we spoke with Sun Catalytix investor and board member Bob Metcalfe back in 2010, he told us that Sun Catalytix aimed to commercialize a new, affordable catalyst that splits water into oxygen and hydrogen. According to Metcalfe, MIT professor Daniel Nocera discovered a process that "mimicked photosynthesis with inorganic chemistry." The science underpinning Sun Catalytix was an amorphous cobalt-phosphate catalyst in solution at neutral pH at 1 atmosphere that can electrolyze water to hydrogen and oxygen. Metcalfe said the materials involved were nontoxic, "dirt-cheap," earth-abundant materials that "you could buy at Home Depot."

And that's the same technology Lockheed Martin is looking to bring to market.

Fiebig said that incumbent flow battery vendors "depend on expensive materials," and that's "a fundamental limit for cost reduction" for those particular chemistries. Flow battery materials such as zinc-bromide or vanadium and their solutes are "caustic," and that makes siting "a big deal."

Additionally, materials which are that aggressive require expensive materials to transport and contain them. Electrodes also have to be replaced more often in harsh environments, according to Fiebig.

He said that most flow-battery materials systems are electrochemical couples or plating technology that depend on one or two elements of the periodic table, and that means "your room for innovation is limited."

Fiebig claims that the Sun Catalytix technology relies on "an engineered molecule" that is a platform for combinations of transition metal ions and ligands. Rather than the acids used in many flow batteries, Lockheed Martin uses an aqueous electrolyte with a "mild pH (like soapy water)" that allows the use of conventional materials in the balance-of-system components, such as PVC tubing, while still providing a "good energy density" that's "better than vanadium."

Flow batteries have made some recent progress in commercialization, but developing new energy storage technology remains a time- and capital-intensive effort. Perhaps Lockheed Martin has the wallet and patience to bring this science to market. 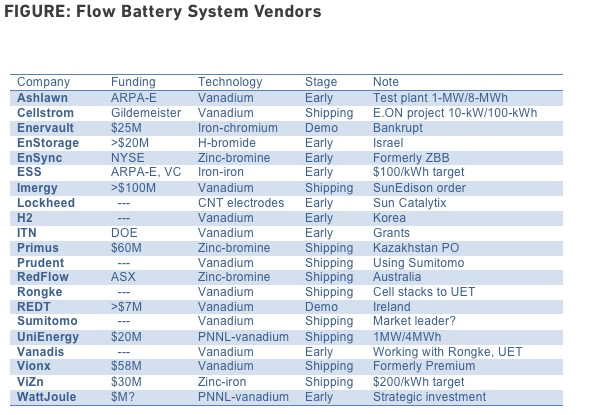