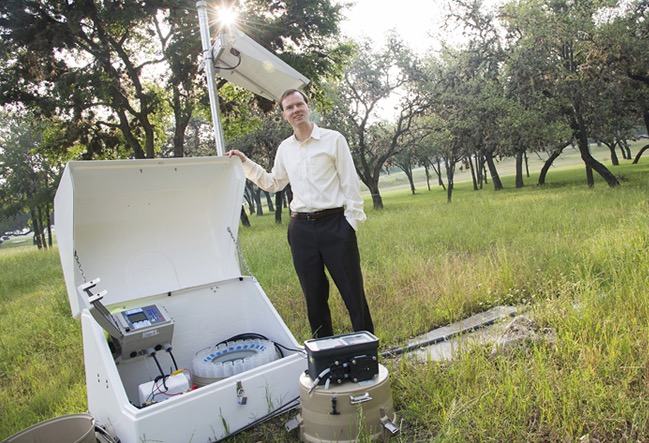 As UTSA aims to become a Tier One research university, it also becomes the subject of an experiment as one of its faculty members puts the university itself under the microscope for water analysis.

Dr. Marcio Giacomoni, assistant professor of civil and environmental engineering, came to UTSA in spring 2013 because he saw the university as a perfect fit for advancing his research on water resources. He has also turned his eye toward San Antonio's water infrastructure, helping prepare the growing city for future water needs.

"I'm inspired by Dr. Giacomoni's career and personal achievements because it's a clear example of how to be resilient and successful." - Bruno Itaquy, student of Dr. Marcio Giacomoni

"San Antonio is the perfect case study to work on water resources research," Giacomoni said. "There are a lot of problems with drought, and San Antonio represents success in water conservation and how to manage water in this part of the country."

Giacomoni is partnering with Dr. Heather Shipley, professor and chair of the Department of Civil and Environmental Engineering, on research that focuses on storm water at the UTSA Main Campus. The Greater Edwards Aquifer Alliance and the San Antonio River Authority funded the project monitoring storm water on campus to understand the current state of its quality and quantity. Because UTSA is at the top of the Edwards Aquifer recharge zone, storm water drains into the aquifer. So Giacomoni tests the quality of the water before and after treatment. By evaluating the current method of storm water filtration, Giacomoni hopes to be able to propose better ways to treat it in the future.

The layers of sand that currently filter storm water at UTSA are generally effective at separating suspended solids. However, the Edwards Aquifer Alliance and Texas Commission on Environmental Quality hope that Giacomoni's research will lead to finding ways to also filter dissolved and microscopic particles, such as heavy metals, bacteria and nutrients. If that becomes possible, storm water could be treated in a safe way to improve the quality enough to be used to recharge the aquifer.

Giacomoni also uses this project to provide hands-on experience for some of his students, who work as research assistants. Travis Lung, a senior civil engineering student, says he feels honored to work on the project with him.

"Dr. Giacomoni actively mentors and pushes me to develop new and stronger skills," said Lung, a nontraditional undergraduate who already has many years of career experience under his belt. "He is open to team collaboration, making it easy to work through issues and brainstorm new ideas effectively. Working for him is an amazingly positive experience."

Beyond UTSA, Giacomoni extends his expertise to the wider city through his research with SAWS, San Antonio Water System. He recently wrapped up a two-year project with SAWS that requires locating and replacing pipes that no longer can handle the flow of wastewater. With more than 5,000 miles of pipes running through the city, SAWS is required to replace old and damaged pipes that overflow when too much storm water leaks into the system. Giacomoni's research is developing a new methodology to identify where overflows are most likely to happen and provide recommendations on the best way to handle replacement.

"If the overflow occurs in a certain location, we need to enhance those areas by putting in bigger pipes," Giacomoni said. "But that will cause water to flow faster downstream, which might cause more problems. Our methodology is beneficial because we're looking at the area holistically. We're looking at solutions that would fix local problems, but not cause more problems downstream."

His research focused on the north intersection of Loop 410 and Interstate Highway 35, an area that encompasses 161 miles of pipes—about 3 percent of the city's total pipes. He used computer-based models to develop mathematical algorithms that can determine where to replace pipes, the diameter the new pipes should be, and the minimum cost for SAWS to achieve its objective.

The algorithm development is an evolutionary process— meaning Giacomoni develops a solution and then tests it to develop better ones. He combines the best results until the research evolves into the near-optimal solution.

"We get to the point where we're confident that these solutions are best in terms of cost and eliminating overflows," Giacomoni said. "We're enhancing this algorithm to calculate solutions faster than what we can do now. We have thousands of miles of pipes in the city, and it would take the computer a very long time to find the solution." Giacomoni extended his original agreement with SAWS to test one more area—west of Interstate Highway 10, near downtown. After completing the final test, he will turn over the algorithm to SAWS for testing in any area of the city to determine the best solution for replacing damaged pipes and stopping wastewater overflows. He's also discussing future projects with SAWS about the possibility of using underground tanks as detention storage for wastewater—an idea that would require some analysis to determine whether it's a viable solution.

Beyond his research, Giacomoni also enjoys his work as an educator at UTSA. He finds it more immediately rewarding, seeing students motivated and learning on a daily basis, rather than waiting months or years for success in research projects. His students also appreciate his enthusiasm in the classroom.

"He has an impressive capacity to stimulate students to ask questions and get involved with the class," said Bruno Itaquy, who graduated in May with his Master of Science in Civil Engineering. "I'm an international student like Dr. Giacomoni was a few years ago, and I'm inspired by his career and personal achievements because it's a clear example of how to be resilient and successful, showing that it's possible if it's something you want for your life."

While working toward his own degree, Giacomoni also participated in research—four years, in fact, which is relatively unusual as an undergraduate. He earned his bachelor's and master's degrees in Brazil, his native country, and decided to come to the United States to pursue his doctorate in civil engineering at Texas A&M University.

Besides the satisfaction of earning the degree, he's happy he attended the university for another reason— it's where he met his wife, Laura, who works in UTSA's development office. The couple lived in Brazil for four months before he went to work at UTSA, in which time she became fluent in Portuguese. Now, they are teaching their one-year-old son both English and Portuguese.

"With a young son at home, I've been more organized and productive," Giacomoni said. "They change your life, and there's no five minutes I can waste. I'm either taking care of him or doing research. These are busy, but enjoyable times."