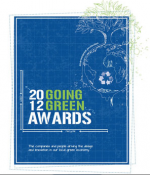 UTSA and the Texas Sustainable Energy Research Institute are recipients of the Leadership in the Public Sector 2012 Going Green Award. The Institute is recognized for its commitment to developing citizen leaders for a global community and leading multi-disciplinary research endeavors that will produce tangible impact for the city of San Antonio. The UTSA Small Business Development Center also received recognition for their efforts in connecting UTSA students with real-world experience and application in sustainable energy fields.

Michelle Garza, an Undergraduate Research Assistant at the Institute and undergraduate Environmental Science major, received the “Up and Comer” 2012 Going Green award for her dedication to environmental outreach in the San Antonio community and leadership on the UTSA campus as President of the Roadrunners for Renewable Resources student organization.

Dennise Castillo is the recipient of the 2013-14 College of Architecture Most Outstanding Graduate Student award at UTSA.

Jennifer Kennedy is the recipient of the 2012-2013 College of Liberal Arts Most Outstanding Undergraduate Student award at UTSA. 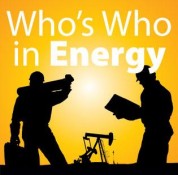 Dr. Les Shephard, Director of the Texas Sustainable Energy Research Institute and Dr. Hariharan Krishnaswami, faculty member of the UTSA Department of Electrical and Computer Engineering, are highlighted in the San Antonio Business Journal Who's Who in Energy edition.Dr. Shephard is highlighted for having more than 35 years experience in energy research, including his 29 years in various leadership at Sandia National Laboratories where he focused on high level radioactive waste management. Dr. Hari Krishanswami is nominated in this edition for his research in modeling Photo-voltaic systems with spatial and temporal variability and as lead researcher of the Texas State Energy Conservation Office million dollar grant to install distrbuted solar energy resources with sensor network monitoring and control at the UTSA main campus.

In order to receive this one-time scholarship, graduate students are required to demonstrate full time enrollment, maintain a minimum GPA of 3.0, and have chosen an academic path that reflects a commitment toward an energy-related career.  In addition, the recipient is expected to participate in an educational project or experience with the Texas Sustainable Energy Research Institute that is also related directly to their degree plan. A final report to Valero Energy Foundation is required by the end of the academic year to demonstrate the educational experiences achieved through this award.

Yashar Sahraei Manjili, a graduate student in the Department of Electrical and Computer Engineering, is the recipient of the 2013-2014 Valero Scholarship for graduate students. 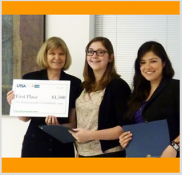 The first-place project proposal, "Smart Campus," was submitted by team members Clare Cloudt (Architecture), Michelle E. Garza (Environmental Science), Norma Gomez (Mechanical Engineering) and Daniel Fisher (Environmental Science). The team proposed that UTSA create a network of "smart" buildings in which sensors placed in breaker boxes would detect the amount of energy being consumed by different zones of the building. To encourage positive energy behavior, data points would be transmitted and analyzed, then shown on a screen show building occupants their zone's energy consumption in real time. The team were all student employees at the Institute at the time of their award.

Thanks to generous support from the United Negro College Fund (UNCF) Institute for Capacity Building, each winning entry received a cash award with $1,500 to the first-place team.